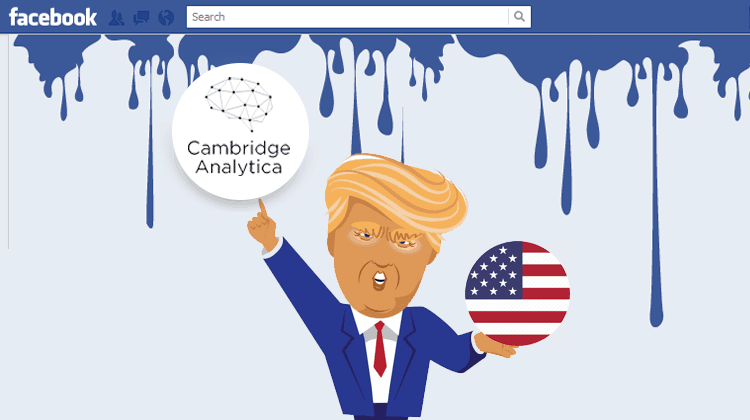 Did Facebook help Donald Trump win the US presidential elections? The answer is out now! In a major Facebook data breach, around 50 million user accounts were leaked back in 2013. And the results are more horrifying than you think.

Two years after he left, Wylie was shocked to discover that Donald Trump was now the President of the United States. And the thought that he was probably responsible for Trump’s success haunted him until he decided to whistle-blow on Cambridge Analytica and reveal the nature of their operations to the outside world.

Back in 2013, Facebook allowed app developers to access data of users who were using their applications. The sharing of data extended to the friend list of those who used any particular app on Facebook. This means that when 300,000 people decided to use Aleksandr Kogan’s Personality quiz app, Kogan got access to the data of millions of Facebook users who were on the friend list of these 300,000 people.

It was revealed in 2015 that Kogan had shared his massive inventory of data with Cambridge Analytica, which was a data inventory firm. As the news spread, Facebook took formal action against these companies and politely asked them to delete any data that they had of their users.

Because of Facebook’s relaxed approach to the situation, Cambridge Analytica continued using this huge inventory of data to their advantage, and later on, shared it with Donald Trump’s election team. Because a big chunk of this inventory contained data of voters in the US, Trump’s election team took full advantage and created personalized advertisements for each US voter on the list.

“We exploited Facebook to harvest millions of people’s profiles. And built models to exploit what we knew about them and target their inner demons. That was the basis the entire company was built on,” Christopher Wylie told the Observer.

And while Facebook knew of this breach of data back in 2015, it did nothing to stop the situation from worsening. According to the data privacy laws in California, Facebook was required to notify the authorities when it discovered this breach in data. It decided to keep quiet about this instead.

Facebook did bring changes to the system back in 2014 when it restricted app developers from accessing too much of user data from Facebook. But it did nothing to take back the data that was already stolen, all because of the loopholes in Facebook’s privacy policies at the time.

Christopher Wylie reports that when he first decided to reveal all this to the outside world, he found his Facebook profile suspended.

“I didn’t set out to attack Facebook. Facebook has just been incredibly uncooperative,” Wylie said. “It hasn’t respected the role of the media and scrutiny and embraced this scrutiny and worked to improve itself.”

Facebook continued using denial tactics until the situation worsened and got completely out of the hands of the social media giant.

Facebook is the most popular social media platform on the World Wide Web. People like to share their pictures, and all the major happenings in their life on Facebook. The news of this data breach comes as a huge blow for people who already had second thoughts about how the social media giant handles their privacy.

The hash-tag #deletefacebook is already trending all over the internet, and people are gradually deactivating their Facebook profiles. If you’re one of those people who want to delete your Facebook profile, then we recommend that you go through this guide so you can have a clear idea about how to go about it.

👋 Signup to our newsletter to receive guides and cord-cutting-tips tips for FREE!! Click Here!
64 shares