You are here: Home / Firestick / Fire TV Tips, Guides and Tutorials / How to watch Pacquiao vs Ugás on Firestick for free
7 shares 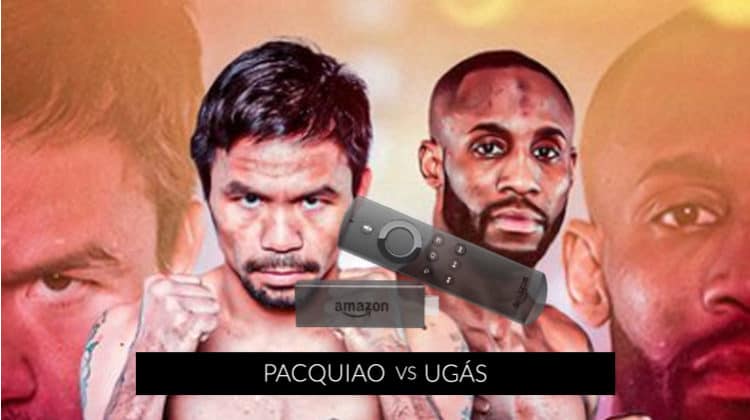 This guide will show you how to watch Pacquiao vs Ugas on Firestick through various free apps. All apps and addons listed here have installation guides below them.

The anticipated match between Pacquiao and Spence for the WBC and IBF title has had a turn of events after the Nevada State Athletic Commission did a pre-fight medical test. Errol Spence Jr was found with a retinal tear in his left eye, forcing him to pull out of the bout; he was not fit and needed surgery. However, the match has not been postponed nor canceled. Manny “PacMan” Pacquiao will now be facing Yordenis “54 Milagros” Ugás on August 2021, at the T-Mobile Arena in Nevada for the WBA (Super) welterweight title.

The stars of this boxing event

Yordenis Ugás is a Cuban professional boxer, and he was initially scheduled for a face-off with Fabian Maidana at an undercard bout before the changes. He is 35 years of age, seven years younger than 42-year-old Manny Pacquiao. Ugás is the current WBA (Super) welterweight champion, having held the title since January 2021.

Before being raised to the Super champion, he also had the WBA (Regular) welterweight title. Incidentally, Yordenis Ugá’s elevation as the WBA (Super) champion came after the inactivity of Manny Pacquiao, who had held the title since 2019 after he won against Keith Thurman. The Cuban boxer said he is ready for the fight despite the short notice, and he is coming to win.

Manny Pacquiao, on the other hand, has made a return to the ring after two years. His last battle was in 2019 with Keith Thurman. PacMan is undoubtedly one of the greatest professional boxers, with four major world titles out of a total of eight divisions. The Filipino boxing legend is also a politician; this is being touted as the final fight in his career as he aims to run for the presidency in May 2022 Philippine elections.

Pacquiao (62-7-2, 39 KOs) and Ugás (26-4, 12 KOs) will meet at the battle ring on August 21, 2021. This fight will be the pay-per-view main event alongside other fights like Robert Guerrero vs Victor Ortiz in the welterweight and Mark Magsayo vs Julio Ceja in featherweight.

The day is quickly approaching, and any boxing fan is eager to know who will carry the WBA (Super) welterweight title. To help you out, we have gone ahead and researched how you can watch Pacquiao vs Ugás on Firestick for free.

🤔Where and what time is Pacquiao vs Ugás?

Here is an outline of the event.

How to watch Pacquiao vs Ugás on Firestick for free

You can watch Pacquiao vs Ugás for free on Firestick by installing one or a few of the best free streaming apps. These apps provides lots of live TV channels, and among these are channels that will be broadcasting the fight to subscribers.

Although the event is only available as a PPV in the US and Australia, UK boxing fans can watch main fight via SkySports Action and SkySports Main Event. But before we dive into that, here are some precautions you need to keep in mind.

To curb the practice, broadcasters have collaborated with ISPs and governments; the result has been blocking streams, sending copyright notices, and taking legal actions.

👉 For these reasons, we highly advise that you use a VPN if you wish to watch Pacquiao vs Ugás for free on Kodi. This will help hide your activities and anonymize your connection to make you untraceable.

Thanks to a deal we have with the VPN provider you can enjoy our exclusive 72% discount on IPVanish VPN. After your subscription, you will still be covered by their 100% money-back guarantee.

The TvTap Pro app is your go-to app for all your home entertainment needs. The app has a well-organized and beautiful interface with a wide range of IPTV channels to choose from, sports channels included.

TVTap Pro has its content filtered out into various groups, including Movies, News, Music, Entertainment, and Sports. To watch Pacquiao vs Ugás, head over to the sports section, where you will find a vast collection of sports-oriented channels. You can catch the match on SkySports Action and SkySports Main Event. The app also offers high-quality streaming of up to full HD, and you can disable ads by sharing idle resources.

How to install TVTap Pro on Firestick & Android TV Box

Live NetTV is among the most popular apps used for live streaming. The app has a vast library collection with over 800 channels to choose from globally. This includes popular sports channels such as SkySports, BT Sport, Premier Sports, and ESPN.

Another excellent option you can use to watch Pacquiao vs Ugás on Firestick for free is RedBox TV APK. The app has a vast content library for you to choose from, Sports included. With RedBox TV, you can choose between SD and HD versions of the same channel.

To watch Pacquiao vs Ugás on RedBox TV, head over to the sports section, where you will find channels offering the boxing event. Besides this method, you can use the search option, a more straightforward way to find a channel that you want.

Oreo TV is a lightweight application that enables you to watch PPVs and any boxing events without having to spend a dime. The application offers various sports channels from its massive library with 6000+ channels from multiple countries worldwide, including the United Kingdom, India, and United States. You can watch Pacquiao vs Ugás using SkySports.

Streaming Pacquiao vs Ugás using Kodi is slightly different from using the apps mentioned above. Kodi is a media organizer and a streaming app that has a compilation of third-party Kodi addons that enable you to stream your choice of entertainment with zero interruption of ads and at no cost at all. Third-party Kodi addons offer every kind of home entertainment, including Movies, Documentaries, TV shows, and Sports. You can also catch up with live events like Pacquiao vs Ugás.

To begin using Kodi, you will first need to install the app on Firestick. Then, you can install various Kodi addons that will enable you to watch the boxing event between Pacquiao and Ugás. We have a comprehensive guide on how to watch Pacquiao and Ugás on Kodi, so head over there if this is your preferred method.

The battle between Manny Pacquiao and Yordenis Ugás for the WBA (Super) welterweight title is an event that no boxing fan would want to miss. However, the charges attached to watching the match live can be a barrier for some of us. If you have a Firestick and wonder how to watch the fight, this article is for you.  You can watch Pacquiao vs Ugás for free on Firestick by installing the apps listed on our guide. However…

Remember that these free apps do not verify the streams they provide, so you should exercise high levels of caution. Before using any of them, ensure that you have a reliable streaming VPN loke IPVanish, and that you are connected to a server.

👋 Signup to our newsletter to receive guides and cord-cutting-tips tips for FREE!! Click Here!
7 shares