You are here: Home / Sports Streaming / How to watch Amir Khan vs. Kell Brook Boxing match for Free on Firestick
16 shares 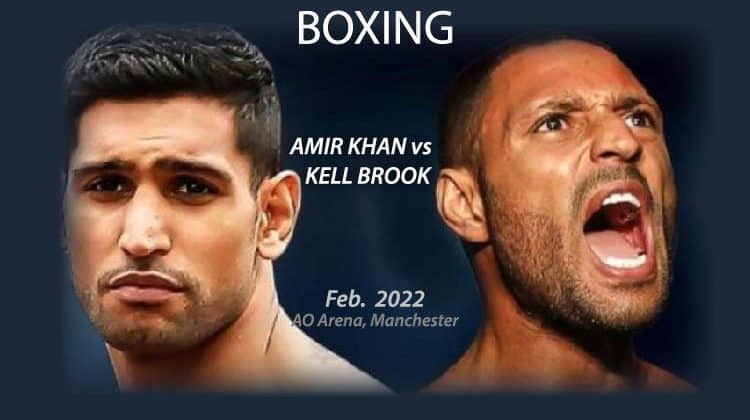 This guide will show you how to watch Khan vs Brook Boxing match for free on Firestick using various Kodi addons. The guide is also applicable to all other devices that support Kodi such as Android TV boxes/sticks, Chromecast, Nvidia Shield, Windows, macOS, etc.

Amir Khan and Kell Brook are finally set to end their long-term rivalry in a high-stakes match that could prove career-ending. The two have been feuding since their teenage years, and their mutual loathing for each other is so deep and passionate that they could not retire without hashing things out once and for all.

‘Special K’ has vowed to flatten ‘Bambi on ice’ over decades of disrespect while ‘King’ Khan wants to ‘destroy’ his ‘jealous’ rival, who he ‘schooled’ as an amateur. The prize? A lifetime of bragging rights.

No one will want to lose this Boxing match, as it will likely be their final fight. The winner will likely earn themselves a shot or two at another payday, but the loser may end up hanging up their boots for good– as Kell has already suggested.

As for British fans, the fight they had almost given up on is finally happening, and we’ll show you how to watch it for free on Firestick.

The feud between Khan and Brook was born in the Olympic camps way back in 2004. The two were promising welterweight fighters in their teens, and they were both competing for a spot in the 2004 Athens Games. Eventually, Khan was selected, and he went on to win Silver. This gave him a high-profile and catapulted his rise to world champion, where he reigned from 2009 until 2012.

On the other hand, Brook has always insisted that he lacked the limelight that gave Khan a lift, but he was better and worked his way up the ladder. “I came up the hard way, in the first fight of the night, taking float fights [time-fillers which are subject to be canceled at short-notice], fights after the main event when everybody has gone home. Brook eventually became the IBF welterweight champion and reigned from 2014 to 2017.

Their rivalry got a platform on a Sky Sports show called Ringside in 2012, and the two went on each other, laying bare their spirited loathing of each other. After years of speculation, they finally get to have a go at each other and prove their superiority.

Amir Khan (34-5, 21 KOs) is a former light-welterweight champion, but he has not been in action since seeing off Billy Dib in July 2019. Before that, he had impressive middleweight victories (although he didn’t win any title) against former titlists Luis Collazo and Devon Alexander. He then made a bold move to challenge the then-middleweight champion and WBC middleweight titlist, Canelo Alvarez, in 2016, but he lost with a sixth-round knockout. From there, Khan returned to welterweight and won against Phile Le Groco and Samuel Vargas, before being outboxed by Terrence Crawford in March 2019.

Kell Brook (39-3, 27 KOs), on the other hand, held the IBF welterweight title from 2014 to 2017, making three successful defenses. During that reign, he ventured into middleweight like Khan, but he ended up with a brutal loss to then-unified 16o-pound titlist Gennadiy Golovkin in September 2016. He subsequently lost his welterweight title to Errol Spence Jr. via 11th-round knockout in May 2017. From there, Brook won his next three welterweight matches. He then accepted a return to middleweight, where like Khan, he lost to Crawford in November of 2020.

The Amir Khan vs Kell Brook Boxing match will take place on Saturday, February 19th. The bout is being held at the AO Arena, Manchester, UK, and ring walk for the main event is expected to take place at about 10:20 pm UK Time. However, this will be confirmed later in the night.

Khan vs. Brook: The Card

You can only access the Amir Khan vs Kell Brooks boxing match as a PPV on Sky Sport Box Office in the UK, and it will set you back £19.95. In the US, the match will be available via ESPN+. Unfortunately, it won’t be broadcast live anywhere on TV.

👉 This means that to stream Khan vs. Brook using official apps, you need to use a VPN if you are outside those two regions. The best VPN, and the one we recommend, is IPVanish. The VPN is super-fast, keeps zero logs, and provides lots of servers in the US and the UK.

You don’t have to dig into your pocket to watch Khan vs Brook as Firestick provides several options you can use to watch the all-British rival match. The best of these is to use Kodi as the program gives access to free streams from the internet and protects users from aggressive ads and pop-ups.

This is made possible by Kodi addons that scrape for links from publicly-available websites and present them in an organized manner. However, you need to be very careful as these streams are almost always illegal.

👉 We highly advise that you use a VPN if you wish to watch Khan vs Brook for free on Firestick for these reasons. This will help hide your activities and anonymize your connection to make you untraceable.

We are currently offering a discount of 71% to all BestDroidPlayer readers, and you can take advantage of it below.

The following Kodi addons will let you watch Amir Khan vs Kell Brook for free live or on-demand after the event has taken place.

The loop is a dedicated sports Kodi addon that provides both live events and replays. The developers update the addon daily to ensure that you can easily access that day’s events (and schedule) right from the main page. You will find all major events there, including Sky Sports Boxing Khan vs Brook.

Apart from upcoming events, The Loop Kodi addon also has a section named Fight Zone. This section gives you access to multiple boxing streaming links that you can use to watch Khan vs Brook. You can also stream the match after it has taken place via the addon’s Replay Zone, which provides on-demand access to all major boxing events around the world.

Sportowa TV is a Kodi addon that brings the best of web streaming to Kodi. The addon does this by integrating multiple web scrapers used by the most popular free streaming sites such as livetv.sx and LiveOnScore.

On the main page, you will find scrapers such as SportsBay, Crackstreams, Rojadirecta, Strims World, LiveOnScore, VipLeague, and LiveTV.sx, among others. All these scrapers provide content in their own way, but most of them have an MMA/Boxing section that provides links to ongoing fighting events. You can use any of them to watch Khan vs Brook for free on Kodi and Firestick.

Mad Titan Sports is the sports version of the popular Mad Titan Kodi addon. The addon provides both live events and replays, and its homepage is updated daily to show the day’s events. On Saturday, you can open the Boxing Direct Links section and look for Khan vs Brooks.

Apart from that, you can also check the PPV and Other Events section. The PPV section provides direct links for ongoing events, while the latter has a Boxing section where you can find Khan vs Brook.

Khan vs Brooks is a highly anticipated grudge match, and it has the potential to end a career. If you’d like to watch the boxing match, the above Kodi addons should help you catch it live or on-demand. Just…

Remember to turn on IPVanish before you start streaming and stay safe.

👋 Signup to our newsletter to receive guides and cord-cutting-tips tips for FREE!! Click Here!
16 shares