You are here: Home / Sports Streaming / How to Watch Ice Hockey 2022 NHL Stadium Series for Free on Firestick
0 shares 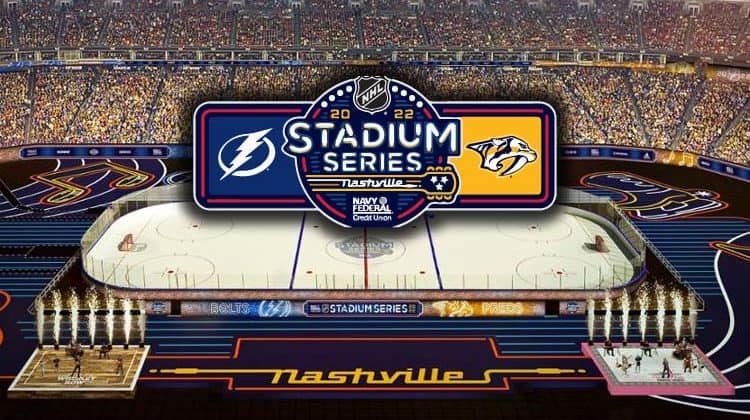 This article will show you how to watch the ice hockey 2022 NHL Stadium Series for free on Firestick using various Android apps and Kodi add-ons. The guide is also applicable to other streaming devices such as Android TV Boxes/Sticks, Chromecast, and NVidia Shield.

The second outdoor game of the 2022 NHL regular season will be taking place this Saturday, Feb. 26, at the 2022 Navy Federal Credit Union NHL Stadium Series. The Nissan Stadium, home of the NFL’s Tennessee Titans, will host the game. It will feature the reigning Stanley Cup Champions Tampa Bay Lightning, taking on one of the hottest teams in the Central Division, the Nashville Predators.

It will be the second time the Preds are taking part in the Stadium Series and the first time Tampa Bay will be making such an appearance. Tampa Bay Lightning will become the 27th NHL team to participate in a regular-season outdoor game.

The 2022 Stadium series will only be broadcast on Turner Network Sports (TNT) in the US, and it will not be available worldwide due to licensing restrictions. However, we know that you don’t want to miss the much-anticipated clash whether you don’t have cable or are not in the US/Canada. In this guide, we’ll show you several methods you can use to watch the 2022 NHL Stadium Series for free on Firestick, regardless of your location.

This week’s NHL on TNT Programming began with Tampa Bay Lightning hosting Edmonton Oilers and the Los Angeles Kings playing Arizona Coyotes. Everything hockey on TNT is now focused on Saturday, and here’s the outline.

TNT is the official broadcasting partner for the 2022 NHL stadium series in the US, with Sportsnet 360 and TVAS2 broadcasting the game in Canada. This means that there are several official streaming services you can use.

Both YouTube TV and Sling TV come with a 7-day free trial so that you can check out any of the services risk-free.

👉 However, note that all above-listed streaming services are geo-restricted, so you will need to use a good streaming VPN if you are outside the US/Canada. IPVanish is the VPN we recommend (and the one we use) as it provides an excellent balance of privacy, speed, and security. The VPN also provides hundreds of servers in the US and Canada, so you will be able to stream without any speed issues.

Free Live TV streaming apks usually aggregate live TV streaming links from the internet, and they can let you watch the 2022 NHL Stadium Series for free on Firestick; this is because the apps come with channels that will be streaming the game. These are:

The latter may not be available on most apps, but the other two are readily available.

However, before you install any of them, there are some important precautions you need to make.

Free sports streaming has been a huge source of concern for many years among broadcasters and content distributors; this is because, in many cases, these streams are pirated.

For these reasons, we highly advise that you use a VPN if you wish to watch the ice hockey 2022 NH Stadium Series for free on Firestick. This will help hide your activities and anonymize your connection to make you untraceable.

Since you are here, you can also enjoy our exclusive 72% discount on IPVanish VPN, thanks to a deal we have with the VPN provider. After your subscription, you will still be covered by their 100% money-back guarantee.

Below are the best apps you can use to stream the game.

Live NetTV is one of the best apks you can use to watch the 2022 NHL Stadium Series for free. The app is known for its huge library of neatly arranged channels into various categories. To stream the 2022 Stadium Series, you can use TNT and Sportsnet 360. You can find the former under Entertainment > US while the latter is under Sports.

Besides the channels, a section lists all live and upcoming events within 48 hours. You’ll find Tampa Bay Lightning at Nashville predators there, and you can select the channel you’d like to stream from. Note that the links are usually added about 5 minutes before the start.

How to Install Live Net TV on Firestick & Android TV

Rokkr is another great apk you can use to watch the ice hockey 2022 NHL Stadium Series. The app is more than just a live TV app as it also offers movies and TV shows, so you can use it for general entertainment.

Rokkr has a Live TV section that provides lots of streaming channels, and among them, you’ll find TNT and Sportsnet 360.

How to Install Rokkr on Firestick & Android TV

HDStreamz stands out among free live TV apps due to its huge channel list and unique and attractive interface. The app provides its 1000+ live TV channels neatly on the homepage. Channels are sorted into Live Events, Sports, Entertainment, Music, Movies, Kids, Infotainment, Lifestyle, News, and Religion. The channels are then grouped into countries to make it easier to access a particular channel.

There are several channels on HD Streamz that you can use to watch the NHL Stadium Series, including TNT and Sportsnet 360. To get them easily, you can use the search option on the top side of the app.

How to Install HD Streamz on Firestick and Android TV

Kodi provides another way to watch the 2022 Stadium Series for free on Firestick. Not only that, but you can also use this method to watch the game on other platforms. These include Android phones, Windows, macOS, and Linux.

To start streaming on Kodi, you will first need to install this media manager/player on Firestick. From there, you can install some Kodi addons. These programs source links from the internet, so you will need to select them carefully.

Thankfully, we regularly test the best Kodi addons, and we have selected three of the best that you can use to watch Tampa Bay Lightning at Nashville Predators.

👉 However, it’s important to note that Kodi addons also do not host the links that they provide, so ensure that you connect IPVanish before you start streaming.

If you’d like more than just the upcoming NHL game between TB lighting and the Preds, Asgard is your go-to Kodi addon. It is an all-in-one addon that provides movies, TV shows, live TV, sports, kid’s content, comedy, documentaries, and much more. The Live TV and Sports sections are quite impressive as they provide lots of content. The former features integrated addons such as TVTap and Swift Streams that ensure you access channels both TNT and Sportsnet 360.

The Sports section has a Sports Catchup section that usually provides all the recent NHL matches, and you can use it to watch the Stadium Series on-demand. You’ll also find lots of other games such as NBA, NFL, Boxing, and Wrestling.

How to Install Asgard on Kodi

The TvTap Kodi addon is an adaptation of the TVMob streaming apk. Like the Android app, the TvTap Kodi addon specializes in Live TV, and it offers pretty much the same channels. The categories include Documentary, Entertainment, Food, Kids, Movies, Music, News, Sports, and USA Channels.

To stream the NHL Stadium Series, you can head to the Entertainment section and open TNT or the Sports section to use Sportsnet 360.

Mad Titan Sports is the sports version of the popular Mad Titan Kodi addon. The addon provides both live events and replays, and the developers update its homepage daily to show the day’s events.

To watch Tampa Bay Lightning vs Nashville Predators, you can go to Live Sports or the Live TV section. Under the former, you’ll find an NHL section where you can watch the game. The Live TV section provides lots of options that you can use to access TNT and Sportsnet 360, including one known as US Cable. All the streams are free.

The Feb. 26 Stadium Series game that will be taking place in Nashville has been well-hyped, and rightly so. The Music City is set to combine hockey with music, and the event is bound to be exciting even on TV. The guide above shows you how to watch the ice hockey 2022 NHL Stadium Series for free on Firestick. However,

Remember to connect your IPVanish app to a server before you use any free streams to stream anonymously and stay safe.