You are here: Home / Sports Streaming / How to Watch Pacquiao vs Ugás on Kodi for Free
1 shares 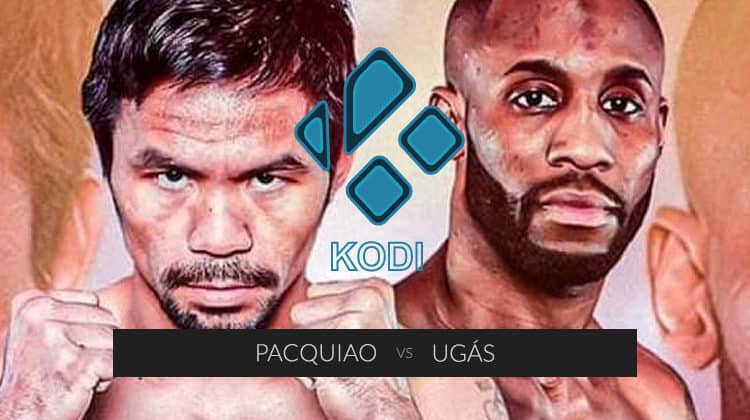 In this article, you will learn how to watch Pacquiao vs Ugás on Kodi and how to stay safe and anonymous while streaming.

One of the most awaited fights of all time for the WBC and IBF titles has had some alterations after Errol Spence Jr. found out that he had a torn retina in his left eye. Errol Spence Jr., alias The Truth, a unified welterweight boxing champion, had to withdraw from the match as he was scheduled for surgery to repair the eye. Manny Pacquiao will now be facing Yordenis Ugás on 21 August 2021 at the T-Mobile Arena in Nevada, Las Vegas, for the WBA (Super) welterweight title.

The stars of this boxing event

Ugás will be defending his title as the current WBA (Super) welterweight boxing champion he has held since January 2021 after replacing (ironically) Manny Pacquiao due to his inactivity since his last match on 20 July 2019. Manny Pacquiao will now be making a return to the ring after two years. His previous boxing match was with Keith Thurman, where he won by split decision at the age of 40. This was one for boxing history books, as he became the oldest welterweight boxer to win a major world title, the WBA (Super) welterweight.

This boxing event is definitely one to look out for despite missing out on the match that had so much hype and was really anticipated (Pacquiao vs Spence). The match between Pacquiao (62-7, 39 KOs) and Ugás (26-4, 12 KOs) is predicted to be PacMan’s last bow in the ring as he is eyeing the presidential seat run for the May 2022 Philippine elections.

The 35-year-old Cuban boxer, Yordenis Ugás, is also very determined to win the battle, and he will be seeking to send the “PacMan” to retirement for good. So who will carry the WBA (Super) welterweight title between the two heavyweights?

If you have installed Kodi on your streaming device, you can catch this fight live and on-demand. We have made it easy for you by doing the hard work, and this guide will show you how to watch Pacquiao vs Ugás on Kodi.

Where and when is Pacquiao vs. Ugás?

Here is an outline of the event.

How to watch Pacquiao vs Ugás on Kodi for Free

If you are yet to, you can install Kodi on Firestick, Android TV Box, Windows, Mac, Linux, iOS, and tvOS. From there, you can install various addons that give you the ability to watch Pacquiao vs Ugás for free.

The secret to watching the event via Kodi is taking advantage of TV channels that will be broadcast the event without any PPV subscriptions. In the US, Pacquiao vs Ugás is only available via Fox Sports PPV, and in Australia, it’s also being streamed as a PPV. However, the event is available for free to all SkySports subscribers in the UK via SkySports Action and SkySports Main Event. It’s also available in Africa via SuperSport Action and SuperSport GrandStand.

👉 For these reasons, we highly advise that you use a VPN if you wish to watch Pacquiao vs Ugás for free on Kodi. This will help hide your activities and anonymize your connection to make you untraceable.

Thanks to a deal we have with the IPVanish VPN, you can enjoy our exclusive 72% discount. After your subscription, you will still be covered by their 100% money-back guarantee.

Here’s a list of the best Kodi addons to watch the fight between Pacquiao and Ugás.

We start our list with the Rising Tides Kodi Sports addon, which comes in handy for sports fans. The addon offers lots of European football and boxing content, well grouped into Live Football, Football highlights, Live PPV events, and more. Rising Tides Kodi addon scraps links from different sources from the internet, and it is free of buffering while streaming.

To watch Pacquiao vs Ugás, head to the Live PPV events section, and you’ll find the match.

How to install Rising Tides Addon on Kodi

The Endzone is a Kodi sports addon that focuses on live events, especially for the American sports fanatics, and Grindhouse Repository offers it. This sports-oriented Kodi addon has its content neatly organized into sections like Wrestling, MBL, NCAAF, NBA Playoffs, MMA/Boxing, and more!

You can watch Pacquiao vs Ugás via MMA/ Boxing category, where you will find different links that you can use.

How to install The EndZone Addon on Kodi

There are many Kodi sports addon, but if you are looking for exclusivity in watching major fighting events, then Fight Club Kodi addon is the one for you! The Kodi addon found in the Stream Army Repo is a popular sport that offers live streams, replays, and PPVs for various fighting matches, including UFC, Impact Wrestling, WWE, and more. However, unlike most of the addons in this list, this addon provides events a few hours after they have aired. This can be great, too, as the US timing of the event is inconvenient for most users outside the US.

A few hours after Pacquiao vs Ugás is aired, scroll to Boxing Pay Per Views, and you will find the match there among other PPVs that have aired before.

How to install Fight Club Addon on Kodi

Found in Magnetic Repo, Apex Kodi addon offers versatile content, unlike the addons mentioned before that focus on sports. This Kodi addon has a vast library sectioned into Documentaries, Sports, Movies, New Movies, TV shows, Kids content, and more. Our area of focus based on the title of this article is the Sports section which has vast content with its primary target being American Sports. The Apex Kodi addon sports sections include the NBA, PPV, NHL, NFL, amongst many others. There is also a Sports Replay Zone and Sports Highlights.

To watch Pacquiao vs Ugás, you need to go to the PPV section/ Wrestling section, and you’ll find sub-sections to guide you through.

How to install Apex Addon on Kodi

Another excellent choice for watching boxing fights is TVTap, a Live TV addon from the well-known TVTap Android app. TVTap Kodi addon has all your home entertainment needs covered with its wide-ranging content in various sections, including News, kids, Movies, Documentaries, and Sports. The sports section is the most popular, and you can tell this from the huge list.

In alphabetical order, the sports channels are listed based on the countries offering them globally. The sports channels cover every kind of sport you can think of, including football, WWE, and UFC. The addon also scrapes for the best links from various sources on the internet.

To watch Pacquiao vs. Spence, head over to the Sports section, and you’ll find both SkySports Action and SkySports Main Event.

How to Install TVTap Kodi Addon

All Boxing fans are eager to know who will carry the WBA (Super) welterweight title. Will it be Pacquiao, who was stripped just in January, or Ugás, the current WBA (Super) champion? We can only find this out by watching the battle; so, we have ensured you don’t miss this by preparing a guide on how to watch Pacquiao vs Ugás on Kodi to enable you to stream the upcoming match for free.

The only issue is that these addons facilitate breaking the law in most cases, so ensure that you stream anonymously. You can accomplish this through the use of a reliable streaming VPN such as IPVanish.