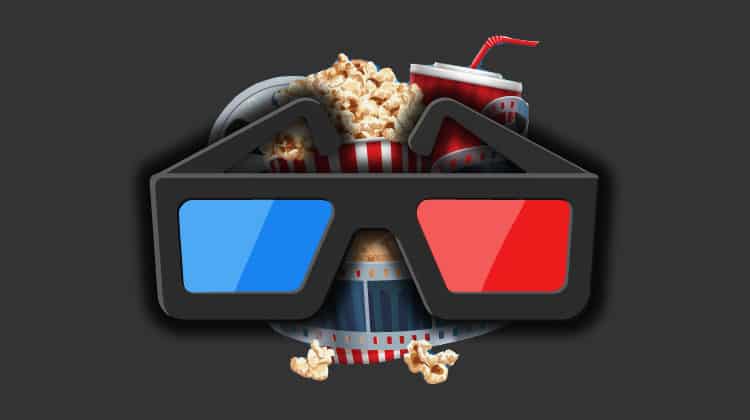 There’s nothing like watching one of your favorite movies in 3D.  The visuals effects are stunning, and the overall experience is simply unbeatable. 3D perfectly brings to life even the most unrealistic scenes. It even makes you feel like the characters are walking out of the screen in front of you every time, no matter how used to it you are. Spectacular as it is, the technology is sadly yet to become established in the industry. Not all good movies are available in this format, and there’s no guarantee that those available in 3D are all good. We’ve sampled the best 3D movies to download in 2021 from different genres that are definitely worth your time. You might have seen them in a different format but, trust us on this; 3D will make them even better.

The most popular way of downloading 3D movies is through movie websites and torrent sites. However, these two are a huge source of concern as they mostly host copyrighted content.

Remember that your ISP is always monitoring and recording your online activities, including the websites you access. This means that you can easily end up with a DMCA notice or a cease-and-desist letter. Apart from that, the servers where these movies are stored are usually not secure, and they log all user information, including your IP address.

Using torrents is even a little trickier as most ISPs throttle P2P and torrent traffic. Others completely ban torrent websites.

If you decide to use a free website or torrent site to download 3D movies, we highly suggest that you use a secure VPN. A VPN encrypts your traffic to make it unreadable to the ISP and then changes your IP address to make you anonymous. From there, you will be streaming privately and securely, and so you won’t be surprised with a DMCA notice or a cease-and-desist letter.

For maximum privacy and speeds, the VPN we recommend is IPVanish. Here’s why:

To help you get started, we have managed to get a special 71% discount for BestDroidPlayer readers, and so take advantage of it and stream safely, for a fraction of the price you usually would pay.😃

Your subscription will be eligible for a 30-day money-back guarantee.

Here’s our selection of the top 7 in no particular order.

You know a movie is great when you see James Cameron in any production or directing role. His projects over the years speak volumes, and they include Titanic and Avatar – each held the record of the highest-grossing movie for a decade.  Alita: Battle Angel is another project featuring Cameron alongside Robert Rodriguez.

The punk action movie from Lightstorm Entertainment has got to be among the favorites of any movie junkie. It is based on a Japanese series by the same name and is centered on Alita, a cyborg character that wakes up in a new body lacking her memories. She embarks on an epic adventure to discover her true identity and destiny in Iron City.

DreamWork’s animated film The Croods should top your list especially if you’re into animations. It’s one of those movies you will never get tired of watching.

The Croods is set in a prehistoric Pleiocene Epoch known as The Croodaceous. The movie revolves around cave people looking to survive in an evolving world. It features some familiar voices like Nicholas Cage’s (Grug Crood), Emma Stone’s (Grug’s daughter Eep). You will also likely notice Ryan Reynold’s voice as he portrays the neoteric character, Guy.

Guy, a revolutionary character, helps the Crood family survive the dangerous journey while traversing the land to a new home. We’ll leave it at that for the sake of the first-time viewers.

It has a sequel – The Croods: A New Age –  that hit the cinemas in November last year and is available in 3D as well.

Marvel Studio’s Captain Marvel was more like the first course leading to the main course – Avengers: Endgame. It is set in the mid-90s where the Kree are in an intergalactic war with the Skrulls. The movie tells us the story of how an extraterrestrial Kree warrior, Carol Danvers, became the superhero we know as Captain Marvel.

Besides Brie Larson (Captain Marvel), the movie features Samuel L. Jackson, Jude Law, Clark Gregg, and Djimon Hounsou in supporting roles. Its sequel is set to be released late next year so you have plenty of time to get a bowl of popcorn and enjoy it. Spoiler alert – You’ll get to know why Nick Fury always wears an eye patch!

The visual effects in this movie alone are enough reason for you to download it. This monster adventure movie from Warner Bros. will easily win your heart thanks to its stunning 3D visual effects and near-perfect character performances. The movie is set in a post-world war II Skull Island where a giant ape named Kong and other huge scary creatures live.

It tells how the Mighty Kong became a King on the uncharted island. Kong: Skull Island features several Hollywood stars in its cast, like Samuel L. Jackson, Tom Hiddleston, John Goodman, Brie Larson, and Toby Kebbell.  It has a sequel, Godzilla vs. Kong, slated for March this year that promises to be just as thrilling.

This epic Sci-Fi movie from legendary director James Cameron is one of the best entertainment works to be produced, and still one of the best 3D movies to download in 2021. It has amazing and groundbreaking visual effects thanks to the new motion capture shooting technology Cameron tapped to create this gem. The movie also has an impressive cast that includes Zoe Saldana, Michelle Rodriguez, Sam Worthington, and Stephen Lang.

Avatar is set in the 22nd century where humans have traveled far and beyond to colonize a habitable moon called Pandora. The crew in the movie is on a mission to find a rare mineral called unobtanium – what a name!

However, the team faces a dilemma as mining the mineral threatens the existence of Na’vi, the native tribe inhabiting Pandora. The movie was made available as 3D upon its release and as 4D in some theaters. Its sequel is in the works, and as you wait, you can download and enjoy the prequel.

New Gods: Nezha Reborn is a Chinese action animation movie that was released a mid-last month. Animations from East Asia may not exactly be your cup of tea, but this movie will leave you wanting more. It is directed by Zhao Ji and based on the classical Chinese novel Investiture of the Gods.

The movie revolves around Nezha –  a warrior reincarnated as a delivery courier Li Yunxiang in Donghai. Nezha has to face his past from three millennials ago, which means taking on his enemies who’ll stop at nothing to kill him.

The movie features the voices of Xuan Xiaoming, Yang Tianxiang, Zhu Ke’er, and Ling Zhenhe. Its action scenes are intense, and the story is exciting to keep you glued to your screen for almost two hours. New Gods: Nezha Reborn is currently hot in cinemas and has garnered a lot of positive reviews. Be sure to download and enjoy the movie as soon as it is available.

You’ve probably watched it a few times, but does one ever get tired of watching a good movie in 3D. Endgame is still the apple of the eye for any movie buff and one of the best 3D movies to download in 2021. The Russo brothers did excellent work on this movie, and it is among the best movies of the last decade.

The Avengers assemble one last time in the movie to reverse the harm done by the big bad boy, Thanos. The movie brings to an end the MCU Phase 4 story as some of the characters make their last appearance – No one will fault you for shedding tears midway through the movie (Even Thanos did). Besides the emotional weight, the movie had amazing action sequences and stunning visual effects.

All these and other excellent 3D Movies can be either watched online or download. The following links will give you clues about both alternatives:

The list above is, by no means, conclusive. There are several other 3D movies from the last few years that are good. There are also upcoming releases like Dune, Godzilla vs. Kong, and Zack Snyder’s Justice League that already look promising based on their trailers. You can follow up on their release and enjoy them too as soon as they are available.

However, before you download any for free, make sure that you connect to a good VPN like IPVanish. This will let you download without looking over your shoulder and circumvent any ISP bans and restrictions.

I hope to have helped you discover some of the best 3D Movies in 2021. If so…

👋 Signup to our newsletter to receive guides and cord-cutting-tips tips for FREE!! Click Here!
173 shares